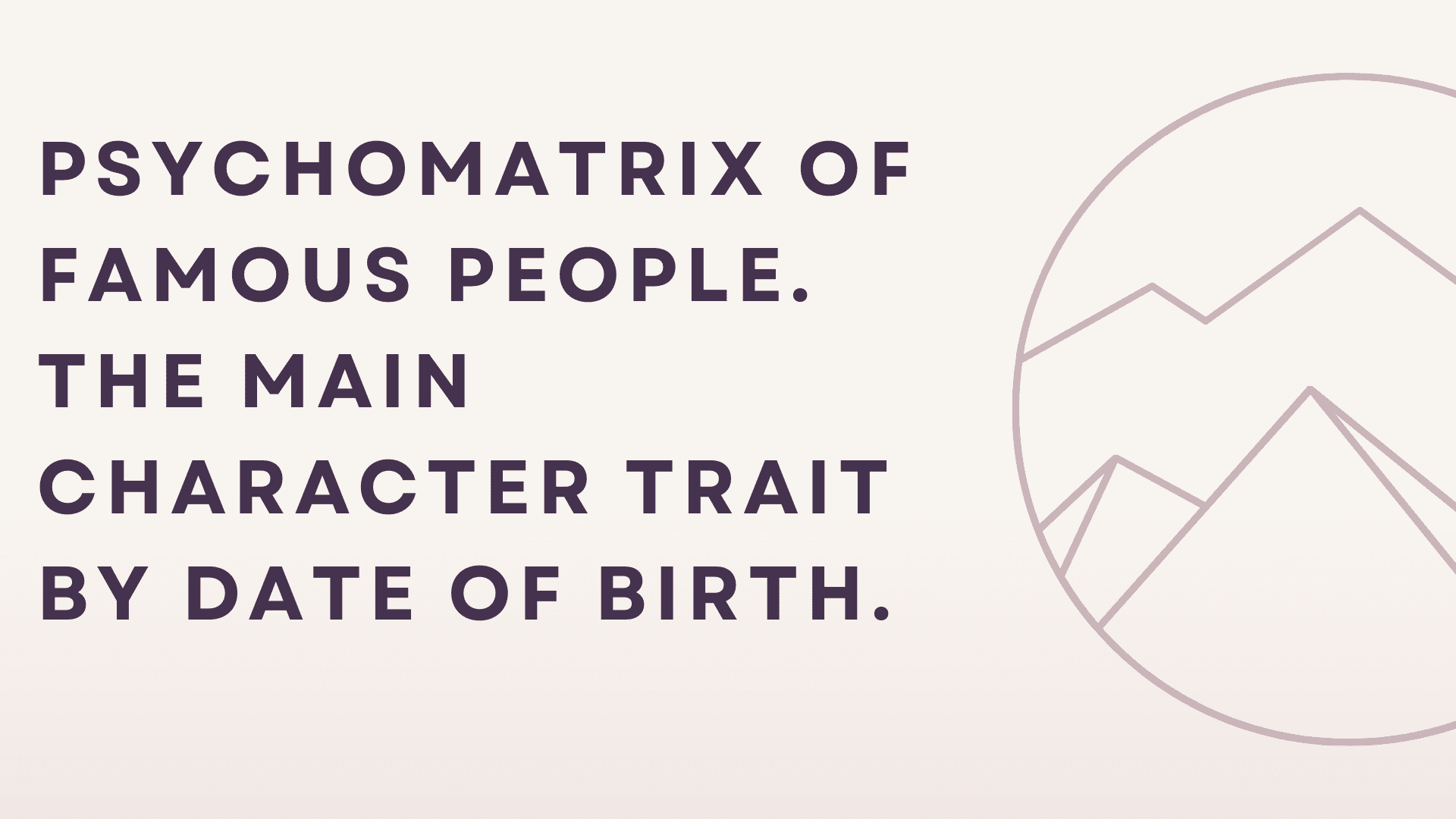 Whether you’re applying to a college, choosing a career path, or going through a midlife crisis, the big question is, “What are you capable of doing?”. That’s why it is very important to understand your own potential. Today I suggest you get acquainted with your own potential and get to know more about your traits of character by date of birth. Alla Aleksandrova, a member of the school of numerology, tells about it.

How well do you know yourself? You will definitely need time to answer this question. Surely you have had situations in life when you did things that you didn’t even expect from yourself. It’s hard to understand other people, but it’s even harder to understand yourself. Let’s try to find out more about ourselves.

What are the Character Traits?

This is not an easy topic. There are whole sciences related to a man, which are trying to find answers about a personality. For example, these are large sections in psychology, where the motives of people’s behavior, the characteristic features of people, and personality traits are studied. Such questions are also studied by sociology and political science. There are separate sections that deal with the study of personality in the course of any events. But the human factor is the most unpredictable.

To understand what character traits exist, it is necessary to conduct special psychological tests. They help bring out the features. There are techniques that analyze human behavior in different situations – ordinary and extraordinary. There is another way – the study of the psychomatrix of a person. Psychomatrix works with the date of birth of a person. It works with any date. Only on the basis of one date of birth, the psychomatrix can determine more than 50 personality parameters. At the same time, there are other methods that are derivatives of the psychomatrix. These are charts, type-thinking.

The Language of Numbers

Let’s take the psychomatrix of famous people, whose character traits everyone knows about. Let’s take the dates of birth and calculate.

Let’s start with Mikhail Lomonosov, because the main university bears his name. Let’s look at its matrix, but you don’t need to cling to one cell, you need to look at the entire matrix as a whole. 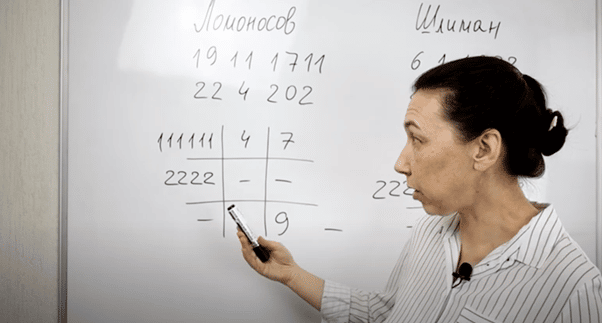 So, we see a very strong character and very strong energy. When people talk about him as a scientist, there should be traits for a scientist – strong logic, discipline, methodicalness. But he didn’t have those qualities. There is a strong memory, but it is only one nine. The main character traits are a huge willpower, with the help of which he forced himself and other people to make decisions and act as required by society and the state. He also has a very strong energy, which gives him infinite strength. Not only strength of character, but also strength of action. This helped him organize everyone.

The name of Heinrich Schliemann is also widely known. This is the man who found Troy. As a teenager, he read the Iliad and believed in everything written so much that he set himself the goal of finding Troy. Let’s look at his matrix. We see that there is no such great willpower. But there are three 8 that are responsible for the ability to get to the bottom of the truth and to restore justice.

The peak of Diaghilev’s career was the Russian season in Paris at the beginning of the 20th century. Thanks to him, Europe and America learned about russian ballet. We do not see anything special in Diaghilev’s psychomatrix. The character is strong, but not rigid. There is the ability to communicate with different people, because he easily finds a common language with them. Two triples are the stability of interest, and two sevens mean luck. His striking character trait is that he used all these character traits in combination. He had a flair and confidence in himself, an inner intuition. 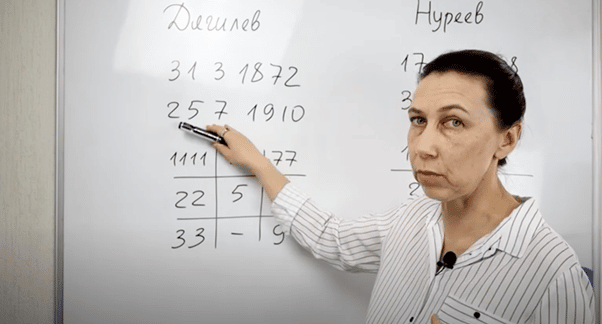 And then he realized that a new century had come and now you can make good money on completely new things, including art. And he became an art manager, that is, a producer who learned how to promote actors to the masses. He helped with such advertising that people went to look at this art. Therefore, it was the totality of these figures that gave Diaghilev this unique trait when he communicated and promoted people. Seven means art, that’s why he tried so hard to promote art.

The name of Rudolf Nureyev is known not only to those who are fond of ballet. This is a man who is arbitrarily upheaval in the male dance world. A huge political scandal was also associated with him, when the premiere of the Bolshoi Theater fled abroad and received political asylum there. In the Rudolph matrix, we first pay attention to triples. Five triples give amazing technicality and sincere interest in the work he does.

It should be noted that he came to ballet late – at the age of 12. But he was able to achieve great results. He has a strong interest in what he loves. The energy is weak, but he has the ability to analyze (five). He also had patience. Nureyev did not have the strongest character, so he needed the support of people to energize him. The zero in the extra numbers shows that his interest was sincere. He was interested in how he did it, the opinion of critics was indifferent. Due to this, he developed the ability to show himself in dance and show it competently, so that everyone would understand and be interested.

The name is very famous. At one time Irina Khakamada was in politics. She is a businesswoman who teaches women how to survive in a man’s world. She has a large number of fans. 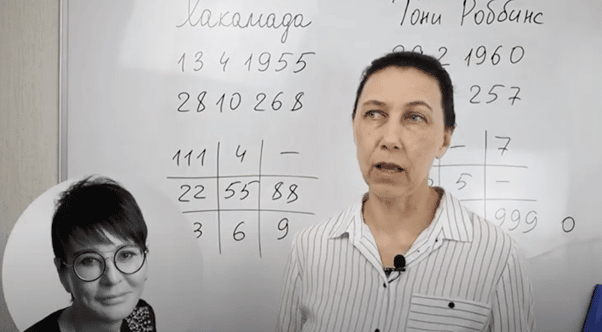 These numbers give the ability to communicate with absolutely any person. Two more fives are added to this – analysis and clear structuring of what is happening. She easily explains the details in order to accurately convey the idea to the interlocutor. She also has a strong sense of responsibility and a great sense of truth. There is a sense of duty here that makes you take care of those around you. She tries to share the information she owns. This person is a born leader and she cannot but help others achieve leadership.

Tony Robbins a business coach, writer, speaker who deals with topics of personal growth and development. His reputation is not so clear cut. This person has great charm, his purpose in life is to be a leader and inspire those who aspire to this leadership. He has great energy, these nines give not just good knowledge. 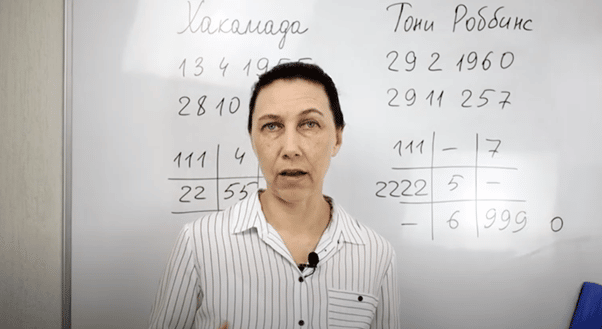 Periodically, a prophecy appears in him, a person asks a question, and Tony understands what a person needs to be told in order to remove his internal complexes. He knows how to read information from a person. Thanks to his energy and ability to influence people, he gains influence on the minds of people.

Of course, we have not revealed all the secrets of the identity of these people. But we saw bright individual features that give them uniqueness. These qualities stand out from the crowd. We do not know them personally, many are not alive. But we were able to create a personal portrait with the help of digital psychoanalysis. And if you have constant access to a person, it will be even easier to make his portrait. You can learn digital psychoanalysis, the main thing is your desire to do it.

This article was prepared using the “School of Numerology and Psychoanalysis by Alla Aleksandrova” channel, video https://www.youtube.com/watch?v=KQ72GROY9_M